Статьи - How to catch a ramp flounder

→ Articles → Miscalculation underwater chameleon, or how to catch the ramp flounder 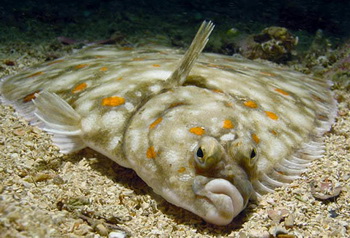 To notice the flounder lying at the bottom is not easy at all.

It turns out that this fish can change the color of its variegated skins. In his art of changing the outfit the flounder will not yield to the famous chameleon.

I do not know about you, but I have seen flounder only in a frying pan, and, perhaps, on the counter of fish stores. Of course, a live fish looks more interesting, but it was not so easy to admire the underwater chameleon, even in an aquarium.

For a long time we peered into the sandy bottom behind the thick glass of the aquarium and could not find a single fish. Finally, someone was lucky: first they found one, then another, a third ... The guide had long gone, and we all stood in front of the aquarium. For half an hour by common efforts on two square meters of sandy bottom we managed to count more than 20 flounders.

And it is in a brightly lit aquarium!

In the transparent twilight of the sea depths, it is almost impossible to see an underwater chameleon.

Much time later, I again had to recall an excursion to an underwater zoo. In the Black Sea, where flounder lives, another interesting fish lives - stingray, or - as we call it - a sea cat.

But most of all he resembles a kite, which boys love to fly into the sky, if not for the moving sides - fins. They like fish, like wings, continuously scoop up water under themselves, slowly swimming along the seabed. Scientists have long been amazed that flounders are often found in the stomachs of stingrays. How the ramp seeks them was not clear.

To catch a floating flounder, he can not - too slow. He cannot see the sea chameleon on the bottom either: the stingrays go hunting only after dusk.

But lurking flounder does not make any sounds. There was a sense of smell, but it seemed implausible. All fish that search for food with the help of smell can move against the current in order to feel the odors brought by water.

Sloth slope, I myself have repeatedly seen it in the sea, always floating with the flow. So what?

The solution was so unexpected that it confused even scientists accustomed to surprises. The organ with which the ramp finds flounder at the bottom is the ampoules of Lorenzini, and those located in the skin on the head of the fish. Ampoules of Lorenzini have all sharks and stingrays.

It used to be thought that they serve fish for measuring temperature. Perhaps it is. The ampullae of Lorenzini of our stingray seem to be very sensitive. They are able to catch the weak electrical impulses that occur during breathing in the body of other fish, including flatfish.

It turns out that in order to remain alive in the sea, not enough to be invisible, not enough not to make a sound and not to spread any smell, you also need not breathe.